An Appreciation of Ann Snitow and her last book, Visitors

By Malgorzata on 22 listopada 2022
0
SHARES
ShareTweet 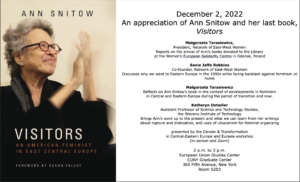 Gender and Transformation in Central-Eastern Europe and Eurasia Workshop  will take place in European Union Studies Center, CUNY Graduate Center, New York, on the 2nd of December 2022, 2p.m. to 3 p.m. in person and Zoom.

Reports on the arrival of Ann’s books donated to the Library
at the Women’s European Solidarity Centre in Gdansk, Poland

Reflects on Ann Snitow’s book in the context of developments in feminism
in Central and Eastern Europe during the period of transition and now.

the Stevens Institute of Technology

Brings Ann’s work up to the present and what we can learn from her writings
about rupture and dislocation, and uses of utopianism for feminist organizing